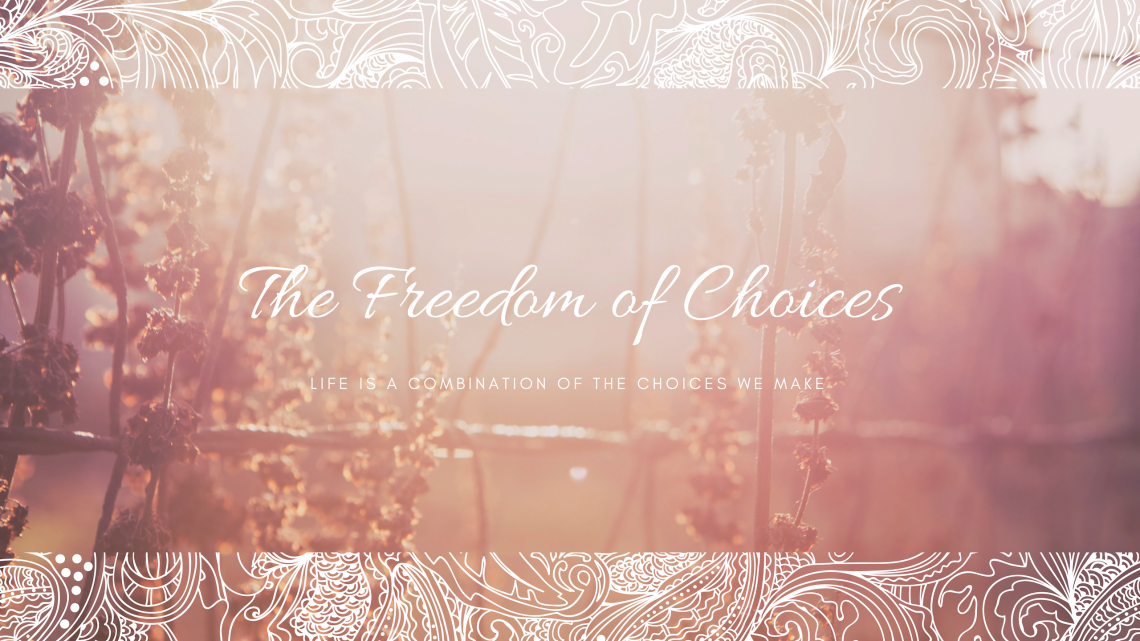 The Freedom of Choices

Life Is A Combination Of The Choices We Make

Every wonder what drives the 18 year-olds to move across country and even the world to come to LA or New York? I do. I’m 34, in my eyes they’re still so young…what drives them to be so brave? Young woman who have so much at stake. We’re fragile in the physical sense. In most parts of the world we’re preyed upon. It’s disgusting but unfortunately the reality of things.

This leads me to my next question. Is that bravery something we’re born with or does it develop through time and experiences? I mean, an 18-year-old hasn’t experienced life to the full extent as a 34-year-old has. I know every person has their own unique circumstances. I’ll speak for a large majority. You have so many young kids who just go for it. And at the same token you have just as many who sell themselves short. What are the differences between the two?

If I just spoke for myself, I’d say for the longest time I lacked the confidence. I’ve always been scared of failure. I could speak of all the reasons why…but what’s the point? The past is just that, the past. Dead.

Things happen in divine timing. I must believe that for whatever reason I was meant to go through life as I have. It’s grooming me for the right time. When is the right time? I think we all will eventually know it when it happens.

Have you ever heard of your “Saturn Return”?. It’s an astrology thing. And I think I’ve had it…or at least maybe even still going through it. It’s rough. It’s like being beaten to a bloody pulp and then healing slowly. It’s actually a very beautiful awakening. Remember, what doesn’t kill you only makes you stronger.

So…back to my first question. What is it with those brave souls? Small towners leaving everything they’ve ever known to pursue their dreams. Most of them go alone! Some do end up going back home. But I can bet anything they didn’t regret it. The feeling of regret weighs so much more than a failed attempt. Others have that tunnel vision. They just keep forging ahead no matter what road blocks they hit. It’s quite amazing!!!

That “tunnel vision.” These individuals know exactly what they want. Dreams can only be fulfilled with great ambition. But it’s not ambition that drives them. It’s the passion. And that passion becomes a conviction. And what exactly is conviction? It’s a MUST. A BELIEF that there is no other way.

We may not all be able to do exactly what it is we want. But there are other alternatives that can fulfill that soul-searching, burning desire that we so desperately long for. I love music. But I can’t sing and I don’t play any instruments. I love dance. I love dancing. I’m a very compassionate soul. I want to help people. If I had a second chance, I would have gone to a performing arts school. I would have pursued dance and something in the music industry. Work with artists and be a part of the music making process. Maybe another lifetime. It doesn’t mean I still can’t get into this type of work. I can still combine all these things and transcend them in different ways.

It’s never too late. Our paths change. The universe takes us where it wants too. Not saying we should leave everything up to the universe and we do nothing. For anything to happen action is required. So if you don’t have the endurance for sacrifice and hard work, you’ll lead a quiet life of desperation. For some, I guess that’s enough. Just as long as your comfortable. For others, there’s no way that passion can be contained. It would be like living a life in the darkness. That…is just too much to bear for me.

To the young people out there, if you know what you’re meant to do in this life, DO IT. Go for it with both legs, arms, butt, head…whatever, lol. DON’T let FEAR or ANYONE hold you back. This is your life, live it. For those my age and older, it really is NEVER too late to turn our passions into something tangible. It just requires a higher standard of living we see for ourselves. We have to TRULY BELIEVE in our vision. If you’re anything like me, you’ll bust your ass off to figure out exactly what it is that you need to make shit happen. Determination…tunnel vision…we CAN and WILL do this. Awaken that giant within.

Tony Robbins, I love you. I think in my next post I’ll  touch on some of the events that have happened these past few months and how I believe the universe gave me the answers I needed. In its own butt kicking way, lol.